A Block Party How the Garden Grows 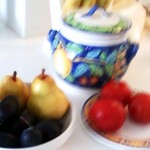 The nonnas arrive at the storefront factory at 8:45am. Each carries a paper lunch bag filled with last night’s leftovers, no  matter what they are (even pasta often turns up), stuffed into a sandwich. They greet one another as the forelady distributes  the sleeves, yokes, and facings that they will turn into parts of a full-length quilted robe.

At 9 am, the mothers (daughters of the nonnas) rush  in, fresh from seeing their kids off to school. Each mother rushes to kiss a nonna. Finally,  the machines and the chatter begin to whir. “Nickel a sleeve,” one nonna grumbles. “Ma, get to work,”  her daughter replies. “I don’t have time for this right now.”

“What do you mean you don’t have tme to listen to your mother?” another nonna asks. And her daughter  tells her, “Knock it off. It’s not your business.” In the meantime, the teams — mothers and daughters — deftly encourage straight seams to glide across  each machine.  All work in silence for a while.

That is, until the boss turns the radio dial  to her favorte Italian soap opera. “Ah,”  say some of the nonnas  who get a kick out of the continuing tales of love lost, found, dead, reborn, or supernatural. “Bah,” many of the daughters mutter.  The radio actors drone in couterpoint to the noise of the machines.

When the show ends and the machines fall silent, the workers snip threads, turn sleeves rightside out,  pass work on  to the pressers. This way, the mothers and daughters can listen attentively to the next radio program. This is Donna Lidia, the queen of  advice — given in Italian — about real-life problems of love lost, found, dead, reborn, or supernatural.  She reads the letters  asking for help. “My husband spends too much time wth his friends, and not enough time with me,”  one listener writes. (See Celebrating a Saint.)  “I think my daughter-in-law is running around.” And the most important one, “My daughter is in love with my third cousin’s nephew on his father’s side, but my third cousin and I are not speaking.”

Lidia puts her heart and soul  into her voice as she coaxes, wheedles, and cajoles the audience into accepting her solutions and opinions. And the nonnas and mothers nod their heads in agreement.

At noon, the nonnas stand, sigh, and reach into their lunch bags. Each takes a piece of carefully wrapped fruit out of her bag and deposits the fruit on the machine of a nonna who has returned after a leave for a death in her family. (See The Wake’s Upstairs–The Macaroni’s in the Basement.)

The mothers rush out  to pick up their kids from school and take them home for lunch. They engage in a  marathon sprint to meet the kids, feed them, get them back to school, and get themselves back to work.

The afternoon passes as the talk turns to food, “It’s Monday, I have leftover chicken soup,” says one. “I’ll make some spedini  for the kids.” Another says, “Cold chicken from yesterday.”  Then each extends  an invitation to her daughter to dine at the nonna’s  house after work.

The nonnas make it clear that their daughters are not to take dinner invitations  lightly. “Your sister is dying to see you,” one says. “Your father’s waiting all week for you to visit,” another says. But there is one weapon  in their arsenal of guilt that is sure to have a daughter say, “Yes, I’ll be there.”

“I never get to see your kids anymore, and I’m fixing the spedini just for them,” says the nonna who has the leftover chicken soup. The daughter knows she’s been bested. Satisfied, the nonna goes back to her stitching.