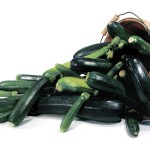 How the Garden Grows

Zucchini, zucchini, zucchini everywhere! Light green,  dark green, striped, yellow with orange-tinged ends. Some weigh two pounds, some weigh four, a few weigh four ounces and a tiny bit more. The nonnas’  front aprons are too small to carry the vegetables from yard to apartment. Lugging a  bushel basket, each nonna  arrives at her zucchini patch. She picks, cuts, and pulls to rid her garden of the oh-so-healthful gems that are strangling every other plant in sight. In  minutes, the basket is full.

The nonnas finish harvesting and gather on a front stoop to talk about–what else?–zucchini.  “Peel them first, then make whatever you want with them,”  says one nonna.

As soon as another nonna hears the word “peel,” she shakes her head wildly, her eyes widen, and her hands  make dismissive gestures even before she opens her mouth.  “What is this peel?” she asks.”All you got to do is use a vegetable brush and scrub them under running water.”

“No,” insists  a third nonna.”When you leave the peel on, they taste bitter.”

A fourth says, “They’re not bitter if you salt them first and leave them in a colander to drain.”

“Who’s got that kind of time?” asks the scrubber.”Besides they’re so fresh, they won’t be bitter.”

The zucchini talk stops when their grandchildren, as if at a given signal, come out to play. But no games can begin until the nonnas have pinched the children’s cheeks–all the nonnas pinch the cheeks of all the kids. The nonna pinching her own grandchild swiftly reaches into the pocket of her front apron and pulls out a dime. She whispers to the kid, “For later, you buy an ice cream.” So absorbed is each nonna in this subterfuge, not one realizes that the others are also  whispering and distributing coins to their own grandchildren. The boys and girls dash off and each nonna is content, believing she has a secret.

Now it’s the thwack of a Spalding– the squeezable, pink ball known in Brooklyn as a spaldeen — the kids toss against a brick building  that punctuates the conversation about — what else? –zucchini.

“I’m making zucchini cakes tonight,” one says. “I’ll fry them in a little olive oil. I should go and chop the zucchini soon.”

“Chop the zucchini? another asks, aghast. “You use the cheese grater to make nice smooth shreds. Then you make the pancakes.”

“The only way to get the zucchini cakes right is to use a potato peeler and make strips, then cut the strips,” says a third.

“So will you peel them or scrub them?” asks the peeler.  And so it goes.