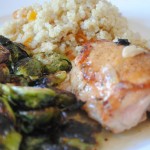 For the nonnas, Saturday morning shopping is more challenging than their daily stop at the vegetable stand, butcher shop, or fish market. On Saturday, they go to the poultry market, a.k.a. the chicken market.  Grandchildren in tow, they’re giving their daughters a morning to “clean the house.”  Each selects a lively, sleek white bird, all the while warning the children to “stay away from that coop, he’s a  mean rooster, and he’ll peck your fingers.”

The nonnas shouldn’t concern themselves with the children’s safety. The children are looking out for themselves. Each child, nose tightly clasped between thumb and index finger, hides behind a nonna.  But  the sight of  chickens running around with their heads cut off  and the smell of singed feathers don’t disturb the nonnas haggling over the  price and weight of the perfect bird.

Purchase completed, ordeal over, the kids race up the block to the pasticerria for their promised lemon ice. The nonnas are involved in talking about their new-fowl finds, about the fact that the market is now selling ducks–“too expensive,” they agree– and about how they are each going to prepare  a four-pound beauty. (They have already discussed which bird has the biggest breast. Reluctantly, they single out the bird one nonna carries. She smiles proudly.)

Soon, each is off talking about the egg yolk experience–the number and quality of  the yolks her mother used to find inside a  bird as she cleaned it. They vie in this major competition, rating the eggs their mothers found according to a proscribed scale.  A small, pale yellow yolk — not so high. An orange-hued yolk–pretty special. A bright yellow, fairly large yolk –almost perfect. A double, bright yellow yolk — a bonanza.

Their next routine is called “I’m not sure I bought enough.”  They follow this with, “Maybe I should have bought two.”  One reassures the others. “As long as you serve it after the soup, the  pasta with the gravy meat,  and the vegetables –along with the roast potatoes — you’ll have more than enough.”  They nod, relieved. “That’s what I do,” she says.

Each returns a child to a mother.

At home, the nonnas wash, trim, and ready the bird for its roasting on the following day. They hack toenails off feet, turn gizzards inside-out, trim nobby wings, preparing all to join the vegetables and the leftover bones  from the roasted Sunday bird for a Monday soup. (See Piecework .)

Now, picking, probing, pulling, and rinsing,  each nonna cleans a chicken to her satisfaction. And to her dismay, there’s not an egg yolk in sight. Better luck next time.