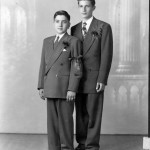 It’s All in a Name

Ah, May.  . . .  the month of  Mother’s Day, the month of  Our Lady,  of communion breakfasts,  of the bishop’s annual visit to the parish church — and the time for  Confirmation and selecting another name.

Today, the nonnas are honoring Our Lady. They bring up the rear of a  processon  following grade-school girls dressed in white and wearing veils. The tallest eighth-grader leads the procession because she’s tall enough to reach up and place a crown of flowers on  the statue of Our Lady.

It’s Mother’s Day and the nonnas, rosary beads twined around their knuckles, wear their traditional black, but today, there are no front aprons. Instead each has pinned a carnation to her outfit. Those whose moms are dead sport white carnations. Those whose mothers are still giving them grief display pink carnations.

As the procession winds its way from the grade school to the church, the nonnas join in singing.  “. . .  we crown thee with blossoms today, queen of the angels. . . .”

When the hymn ends, one nonna nudges the one next to her. “Look, the tall one carrying the crown.  Poor girl she’ll never marry.”

“Sh, sh,” another nonna hisses. “Everybody will hear you. Besides, she might meet a really nice tall fellow.”  The gossips bow their heads and finger their rosaries.

It starts to drizzle when the procession reaches the churchyard. Suddenly, there’s an outpouring of prayers, rosary-bead clicking, and kisses to heaven. The rain must not ruin the ceremony. The prayers to keep it away ascend like a Najavo  chant. The invocations work  and the clouds remain just full enough to contain a real downpour.

The  pastor’s homily stresses how special mothers are.  Throughout, the nonnas nod in agreement.

When the ceremony ends, they  rush up the hill from the church. Two of them must return later in the day to see the bishop confirm their grandchildren as soldiers of Christ. Though breathless as they climb, each talks  about what she’ll serve at the confirmation party.

“I’m going to do sandwiches — some pot roast  I made yesterday on nice warm rolls,” one says.

“Me, too,” the  other says. “Sandwiches are perfect for a crowd. Who’s your granddaughter’s sponsor?'”

“Bah, my daughter is so modern. She doesn’t believe in that. Her sponsor will be the one the pastor picks to stand up for all the kids who have no sponsor.”

“That’s okay. But what will she do about a confirmation name? She’ll have no one to name herself  after.”

“It’s only a middle name–not so important. But I think she likes Veronica.”

“What about your grandson? Is he having a sponsor?”

“Yes, but there’s  a little  disagreement.  My son-in-law  coudn’t  ask his younger brother to be the sponsor because he’s named after  their father. If  he was the sponsor, my grandson wuld be named Joseph Joseph.”

“Of course,” she nods, understanding completely.

“When he asked his older brother, Gaetano, to be the sponsor, his brother, Joe,  had a fit. And now my grandson is complaining that he doesn’t want Gaetano as a middle name. ”

“Maybe being modern is better. No family fights.”