It’s All in a Name Across the Alley 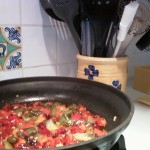 The nonnas’ front aprons are full, full, full, brimming with hot peppers — long ones, chubby cherry ones, and wrinkly ovals. Red, green, stripes of red and green, stems curling  around the nonnas’ fingers as each picks one more to add to the bunch.

When they return to the stoop after cleaning their crop, each carries a bunch of the longest, reddest peppers, a spool of thick thread, and a huge quilting needle. Each threads her needle, knots the end of the double thread, and begins to string peppers one at a time through their green stems. They are stringing the peppers for hanging to dry.

“I hope it’s not damp tomorrow, so  the peppers have a chance to start drying .”

“I hang them and forget them,” a nonna says. “I don’t even use them until Thanksgiving,”

“The best are the fresh, like the ones we picked today, fried for a long, long time in oil with garlic and salt.

The other nonnas  shake their heads when she  says “a long, long time.”

“No,”  one says. “You  should cook them for  only a few minutes in the oil, add the salt and garlic, and that’s it.”  She weaves the needle through her front apron,  freeing her hands to dust them together.  As far as she’s concerned the case is closed.

But the nonna who slow-fries the peppers insists hers are best. “I’m making them tonight,” she says. “I’ll bring you a taste after dinner.”

The others raise their eyebrows, look at one another,  and avoid looking at her. Who is going to make hot peppers better than the ones they make — fast-fried — the ones their mothers taught them how to make?

On this end-of-summer evening, the men have already  moved a card table to the curb for their nightly game of Brisc. The nonna with the slow-cooked peppers commandeers the table and places on it a bowl of crisp, faceted slices of  jewel-like peppers glistening with olive oil and sprinkled with tiny, golden nuggets of garlic. She removes a large loaf of crisp bread from a brown bag and tears the bag open to serve as a tray for the bread.

At the sight– and the scent– of the peppers, the men become the first to help themselves, breaking off  bits of bread to scoop up the tasty offering.

As the nonnas saunter to the table, they pretend not to hear the men commenting on how delicious the peppers are. The one  who dries peppers “until Thanksgiving” is the first to use the bread to sop up a bit of oil and fold it around a few peppers.

She  licks her lips, but remains silent as the others dig in. When she  notices that only a few peppers and some shards of bread remain. she eases her way to the table, picks up a crust of bread and begins vigorously wiping the bowl clean. Then she downs  the bread in one gulp. No more will she be fast-frying hot peppers. Tomorrow night, she will make and serve these  delicious treats.

“They’re all right,” she says to the nonna who prepared the dish,”but they could use a little more salt.”