A Baby Is Born Ready for a Wedding 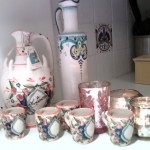 The basement with its laundry room and functional kitchen becomes a ballroom on New Year’s Eve. Twisted colorful crepe-paper streamers criss-cross the space’s low ceiling. The radio is turned up loud and brings in the best music of the night from New York City’s Hotel Roosevelt.

Each year a different neighborhood  nonna hosts the year-end festivities. Each year, every basement is decorated the same. Nonnas and their families, including grandchildren, ages eight weeks to 18 years, arrive at the party at eight.

The kids  suffer the cheek-pinching ritual and the “Look-how-big-you-got” speech before they put on their party hats, grab old pots and lids to serve as noisemakers, and station themselves on the basement steps.  With a bit of pushing and shoving, they line up and create a wall of people that is sure to endanger the descent of anyone older than forty. The babies are having the laughs of their lives as nonnas pass them from arm to arm.

The teen boys and girls eye one another. Most have not seen the others since a party on Memorial Day or Labor Day. The father of one teen starts to dance the lindy with his daughter. That’s enough of an invitation for others to start dancing. And one wise-guy teen drags his nonna, the hostess, onto the floor and twirls her round and round. She giggles, blushes, and turns away quickly to get back to the stove and fry the zeppole, their traditional  party treat.

The  bowls of yeast-raised zeppole are on the table along with a platter of American glazed ham, a huge casserole of gravy meat, and trays of as many pastas as there are Sundays.  At least six other savory dishes with serving  forks are on the long portable buffet table.  Drips of gravy from the meat have already made their way through the white paper tablecloth that proclaims “Happy New Year!”

But the zeppole are the stars of the show. They are swallowed up as quickly as they appear on the table. Some are dusted with powdered sugar. Others have bits of anchovy inside their airy centers.

The nonnas are fast friends; they have been for years — forever.  But each nonna, licking powdered sugar from her fingers or the salt of anchovies from her lips, has something to say about the zeppole.

“A little heavy,” one says.

“Too greasy,” another says.

“Not so-o-o bad,” says a third as she dusts her hands together.

In the meantime, they see no reason to walk away from the bowl that is regularly filled with  new batches of golden brown puffs.  They can never taste too many samples. Each compliments the cook, whose face is red and glistening from her stint at dropping dough into boiling oil.  Still, she also manages to zing the zeppole-making  ability of one crony. She reminds them, “This year’s zeppole are so much better than  the ones we had last year.” When she turns away, each finger-licking, lip-smacking nonna raises an eyebrow.

The moment is approaching when sentiment  is to triumph over snide asides. The kids on the stairs begin to count down to midnight, imitating the voice of the radio announcer. A couple of teens have made it to the handholding stage. Husbands stand next to wives. Even nonnos sidle up to nonnas. It is the one time in the year when the grandchildren see their grandparents display affection toward each other.

“Five, four, three, two, one . . .  Happy New Year!” And from the Hotel Roosevelt, Guy Lombardo and his Royal Canadians play “Auld Lang Syne.” Every couple kisses; some dab at their eyes. The children bang pots and lids. The nonnas embrace. They do not mention the zeppole, they simply wish one another a healthy, happy New Year.