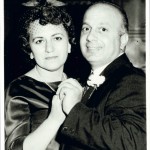 Ready for a Wedding

It is midafternoon on a blustery winter day; the sun is hiding behind a cloud. The nonnas sit around a kitchen table, each crocheting a lacy gift for a June  bride. Their fingers move nimbly to cast onto their crochet hooks the finest cotton thread — thin enough to sew  seams on a silk wedding dress. There is no question of color here. Each uses white or eggshell. Their job is creating individual spiderweb-like flowers to join together into a bedspread, a tablecloth, doilies — and maybe runners for the bureaus, too.

A huge pot of chicken soup simmering on the stove adds mist to the windows and an appetite- teasing aroma to the kitchen. The women are working quietly when the door bursts open.  The upstairs neighbor stops in for a visit.

She takes off her coat and settles herself at the table. “What is that smell from the chicken soup?” she asks. “It’s not bad,” she says, wrinkling her nose. “But it is different.”

She has hit a nerve. The others  begin to talk , sharing their opinion on the scent of the soup. “I didn’t want to say anything,” one says. “It does smell delicious, but different.  Maybe American? What did you put in it?”

“I went  to buy carrots and celery and the carrots were tied in a bunch with a parsnip and a turnip. I asked Mike, the vegetable man, what the other vegetables were doing with the carrots. He said, ‘Americans call this a bunch of soup greens.’  They put it in soup.”

Stirring the soup, she says, “So I try it. I’m making weddding soup and I want a nice rich broth.”

“Bah, listen to her,” the visitor says. “She thinks everything’s funny.”

“Well,” the giggling nonna says, “they call them soup  greens, but there are no greens in them, just carrots and turnips. In wedding soup, you have to ‘marry’ the meat with real greens — escarole, spinach or something like that.”

“I know,” says the hostess nonna. “I bought  a big bunch of escarole.”

The prickly visitor has run out of steam. Instead of making another stinging  remark to the nonnas she’s been zinging  for too many years to count, she sighs. “I remember the soup mamma used to make — not filled with just greens and meatballs but with provolone, Parmigiano, bits of prosciutto, and sopressata.”

And they’re off. Each nonna adds another ingredient to the soup her mother used to make.  A tureen as big as Naples could not hold all the meats, cheeses, greens, and broth they come up with. They end the list sounding as satisfied as if they had downed the entire dish.

“Tomorrow, you all get a taste,” the hostess nonna says. “A wedding soup with an American touch.”

“Save some for me,” the visitor says, “even though it smells different.”

One Response to Ready for a Wedding