The World at Their Doorstep Pizza Rustica 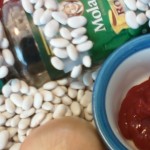 There are no flowery fields of clover in Brooklyn. So on hot summer nights, streets and sidewalks become living rooms and tiny backyards become campgrounds.

The nonnas’ grandsons gather their supplies for their campfire feast: a rickety four-legged metal burner that should hold a can of Sterno, twigs  and newspapers  to place on the burner, a can opener, and a bottle opener. Their feast of choice: new potatoes that a nonna has scrubbed pristine, as many cans of  Heinz Pork and Beans as there are guests, and bottles of Mission soda –grape, cream, lemon-lime.

The boys set up camp  as far away as they can from both the circle of folding chairs the nonnas occupy and the fig tree. About the fig  tree? A nonna has warned them within an inch of their lives to keep their distance.  The nonnas  shoo away the campgoers’ younger siblings, especially sisters, as soon as they step foot in the yard.

The boys each  throw a flaming Diamond wooden match to ignite the crumpled newspapers the twigs rest on.  Their mothers lean out of second-and-third-story windows or sit on fire escapes watching the dinner party. Even though they find the boys and their fire-making activity nerve wracking and it gives them occasion to bite their fingers in frustration, they respond to the nonnas’ leave-them-alone hand motions and suffer in silence.

In the nonnas’ circle  it’s outdoor crochet season — and their fingertips dance  nimbly to create edges of lace on white linen handkerchiefs.

The embers are glowing brightly as the boys toss the potatoes into the makeshift oven. The crisp click of a can opener  piercing a can is followed by the  release of the sticky sweet scent of pork and beans. Each boy places his newly opened main course alongside the fire.

“Bah, the spoons, the spoons.” a nonna says. ” They forgot the spoons.” She rises and and goes into the building. In the meantime, the  other  nonnas call upon all the saints in heaven to protect the boys from setting their hair on fire.

The boys have commandeered an old tin tray from a local bar to use as a serving dish for the poatoes. Chipped white soup bowls on loan from a nonna’s kitchen fill in for sharing. Anticipation fills the air as the boys use tongs to push and pull spuds out of the fire and pour the barely lukewarm beans into the bowls. The nonna who retrieved the spoons passes them out.

The boys are about to dig in. But the oldest in the group signals to the others to gather around. Each boy begins to spoon a portion of beans and broken bits of potato into a bowl. They throw out their fingers in “once, twice, three, SHOOT!” to appoint a  bowl carrier. The chore or the honor falls to one of the youngest.

As he walks across the yard,  he  carefully balances the bowl that now holds three spoons in addition to the food. He presents the offering to one of the nonnas and says, “You each have a spoon.”

Surprised and pleased but never expressing too much (or any) praise, each thanks the boys in her own way. “Thank you,” one says. “But you’re lucky you didn’t burn your eyelashes off.”

“This is very tasty,” another says, savoring a mouthful.”Thank heaven your mother didn’t see you almost catch your shirt on fire.”

“Thanks,” says a third. “This looks really good, but did you remember to rinse the top of the can before you opened the beans?”

The dish-bearer starts runing to his buddies — all the while, shaking his head and waving his arms in disbelief.

2 Responses to Guarding the Fireside