In the Style of the Shoemaker A Semi-Private Bath 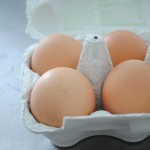 We Need the Eggs

On  a hot July afternoon, the nonnas are sitting on folding chairs at the curb, crocheting lace trim on linen handkerchiefs, and watching their grandchildren play in  water spewing from a fire hydrant. “Too hot to cook tonight,” one says, “maybe I make sandwiches.”

The others almost in a chorus pooh-pooh her. “You know you’re going to cook–just make something easy, like eggs.”

“I have to cook eggs in a new way,” another says. “When the boys went away to The War, they ate only fried eggs, scrambled eggs, and frittata. Now they want eggs easy-over — I don’t know– or over-easy, eggs on top of grits with sausage, and sometimes in what they call a Western omelet.

“It’s true,” a nonna says. “For years I tried to get my son to eat polenta, and it was always, ‘You’re kidding me, Ma, not that.’ Since he comes home, he takes the corn meal out of the cabinet and asks me to  make grits. I follow the instructions on the package and fry eggs and sausages to serve with the grits. I take some grits myself. If I add some cheese and a drop of olive oil, I have polenta.” She shakes her head.  “But he calls it grits.”

The tinkling bell of the Bungalow Bar truck coming down the avenue causes a rush of dripping wet children to run to their nonnas for coins. They are eager to buy a toasted almond pop, or a coconut-covered pop, or a traditional pop draped in chocolate.

Two of the older boys hand their unopened ice cream to the ladies and ask permission to take a ride in the Bungalow Bar truck. Faces beaming, they run past the younger children  and climb into the front seat next to the driver. The ride lasts only a few blocks and the boys step out of the truck when the driver makes the  next stop. Then they race each other to pick up their ice cream.

The nonnas’ fingers move swiftly as they crochet. But one puts down her crochet hook. “It’s because they went to those places, you know. Virginia, Kentucky, Tennessee,” she says. “That’s where they learned about all those different ways to make eggs. When they were overseas, they never even saw an egg.”

“Aha,” one says and the others nod in agreement.

After indicting all the states beyond News Jersey, the nonna says, “Still it’s not so bad to learn something new. . . . How do I make a Western omelet?

All who know shout out an ingredient or two adding to those already mentioned. The nonna who asks for the recipe calls to her grandson. “Here, take  this quarter. Go to the store and buy a quarter pound of ham.” She dusts her hands together and turns to the others. “I always have peppers in the house.”

“Why not? But maybe I sprinkle it with a little Parmigiano–be tastier that way.”

3 Responses to We Need the Eggs