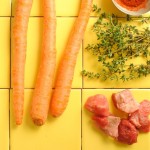 “In  a quaint caravan, there’s a lady they call the Gypsy,” the song says.

In South Brooklyn at autumn’s end, the quaint caravan isn’t a brightly colored, circus trailer set up for temporary living. It’s  a storefront. Any vacant storefront on an avenue can become home to the lady and her family — the Gypsies.

Heavy red and gold drapes hang in the window of their new home, a former  tailor shop. The drapes fail to meet in the center, leaving just enough room for people to peek in while passing by.  The opulent curtains seem at odds with a very visible  canvas-covered  ironing board affixed to one wall.

Outside the doorway of a nearby vegetable store, two nonnas meet. One sees three boys looking in the window of what they still call “the tailor’s.” She  bites her index finger on a hand held parallel to her lips. “Get away from there!” she shouts at the boys.

The boys make a show of covering their eyes and scoot around the corner.

And this gives the nonnas the chance they have been waiting for, their opportunity to discuss the Gypsies.  The  topic of the neighborhood newcomers  has almost replaced the nonnas’ favorite subject — food.

“We don’t know what goes on in there,” a nonna says.  She motions toward the storefront home.

“I notice the young man this morning,” the other says and lowers her voice. “He wears an earring.” She raises her eyebrows and shakes her head in disapproval. But it’s only mild disapproval. “You should see the good job he did fixing that fender on my son’s truck.

“But the old woman worries me,” the other nonna says. “She tells fortunes. Of course,  my daughter-in-law is always first in line to hear what the Gypsy has to say.”

“Did her fortune come true?”

“Well, the old woman told my daughter-in-law that she was going to have a baby. That wasn’t a surprise. She was already seven months pregnant.”

Their conversation is interrupted when they see a toddler  running  out of the tailor shop. The girl starts moving toward the  street, and  the nonnas make a dash for her. One reaches for  the girl when she is inches from the curb. The old woman and the girl’s mother rush out of the store  to pick up the girl and to thank the nonnas.

The nonna nods knowingly but  says nothing as she passes the girl to her mother. She waves her hand in dismissal when the mother thanks her.

The other nonna is uncharacteristically quiet as she breathes in a spicy scent. She turns to the younger woman. “What are you cooking?” she asks.

“Paprikash,” she says. “It’s  a stew with meat and vegetables and paprika.” She recites the ingredients. The nonnas can hear a recipe once and commit it to memory.  But this woman does not understand  the nonnas’ tradition. Never share a whole recipe. She should leave out at least one ingredient.

As soon as the nonnas are out of earshot, they discuss their close encounter. “They  don’t seem so bad,” one says. “And she did tell us about the stew.”

“Yes, but she probably left something out.”

That evening, the nonnas are on their way to church for their weekly novena. “I made the paprikash.  I don’t think she left out anything. It was delicious.”

“Now if she would only fix those drapes.”  She waves her hand in the air. “Bah.”